Holiday Shopping Guides are here! Get ideas for everyone on your list. Check them out!
Home | Family Activities | Best Games to Play on New Year’s Eve 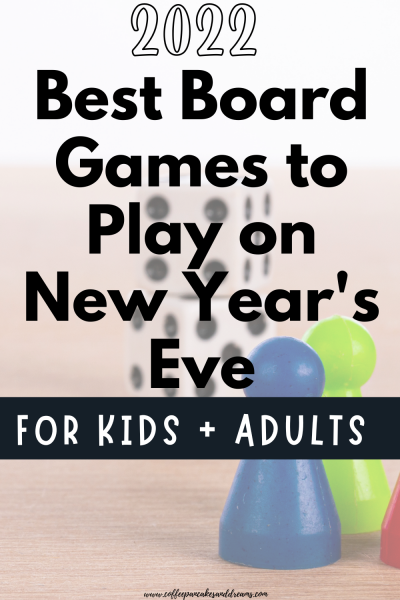 This post contains affiliate links.  That means that if you click through and make purchases, I may earn a commission.  For more information, feel free to see disclosure.

Are you planning a night at home with family or friends on New Year’s Eve? While it came be fun to venture out on New Year’s, many people prefer to stick close to home. There are a lot fun activities you can do at home on New Year’s Eve. Some of our favorite things to do is to have a friend and family game night! We spend the holiday with another family. So we are always looking for both kid friendly and adult games to play.

If your celebration includes a mix of kids and adults, here are a few games to keep everyone entertained! Almost all of these games are high energy and funny! On New Year’s Eve it is all about staying up to midnight, so these games will keep you awake!! Also, be sure to read How to Plan a Family Friendly New Year’s Eve Celebration.

This is our new family friendly favorite card game! We played Cover Your Assets at Thanksgiving with our entire family and everyone raved about it. It is a pretty easy strategy game to learn. The 5 star reviews on Amazon say it all about this fun game!

If you are looking for a game that takes a little more time (30-60 minutes depending on how many players), Ticket to Ride is a great game! This is a really fun and strategic board game for ages 8 and older. We have played this game many times with friends and family. Everyone has a different strategy and winning is a bit of luck and skill.

Watch Ya Mouth is a very hilarious game to play with kids and adults. You use a mouthpiece (don’t worry you don’t have to share) to say various phrases and your team has to guess what you are saying. It makes for a lot of laughs and also a lot of photo opportunities! Everyone looks pretty hilarious wearing the mouthpiece. It is a great game for kids to play with each other with minimal adult assistance. 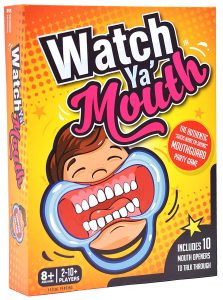 Our kids just got Exploding Kittens as an early Christmas present and we are loving it! It is a fast action strategy card game that is for kids and adults ages 7 and up. It took a few minutes to understand the rules of the game, but then it was very easy to execute. It’s a great portable game that you could pop in your purse and play anywhere.  Also a fast moving game, so it can be perfect if you don’t have a lot of time.  I will definitely bring this game with us on New Years Eve. 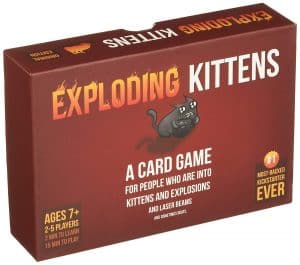 When I asked my kids what games they like to play on New Years, my daughter mentioned Yahtzee. This is a totally classic game that we play year round. But it is a great one for New Years because it is fun for all ages. If you have little kids in the crowd, you can always pair them up with a bigger kid to make them feel included! 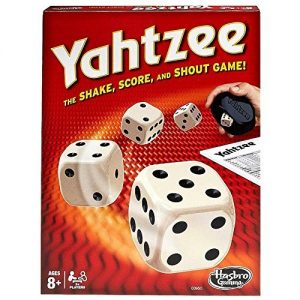 There are many different version of Hedbanz including a lot of family versions. We have this Pokemon version but this Hedbanz Family Edition would be a crowd-pleaser! Everyone wears a headband and has to guess “What am I?”  You must ask yes or no questions to figure out if the card on your head is an animal, food or man-made object. This game is great for even young players! It is great way to get everyone engaged and talking with each other! 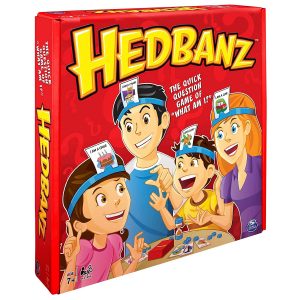 If your crowd is willing to get a little messy, than Pie Face is very hilarious game!! Take turns trying to cannon a load of whipped cream into each other’s faces. You can corral the kids (and willing adults) and let them play this game on their own. As you can imagine, it can be a little messy. But the kids love getting a little whipped cream on their face (to lick clean!) Be sure to purchase whipped cream in advance! 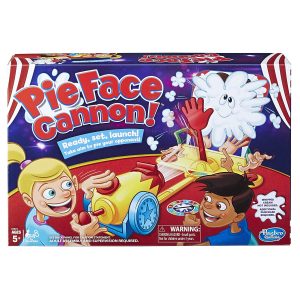 If you have a chance to play some grown up board games, I’ve got a few ideas for you!

We have been playing Catch Phrase for YEARS. It is a great game for a big group of friends. I just saw the Latest Catch Phrase Version and I am sure it would be a lot of fun. This version is for ages 12 and up.

This game is a cross between hot potato and charades. To play, you divide the crowd into two teams. One person from each team goes up at the same time and the two representatives pass the Catch Phrase device back and forth. The captain is trying to get their team to guess the phrase on the device. Once the team guesses the phrase, the device is passed to the other team captain. Whoever is holding the device when the timer (that is inside the game) runs out loses. The device keeps track of the score making things even easier!

Cards Against Humanity came out several years ago and it seemed like it would be a fad. But this game has endured! With a 5 star rating on Amazon and over 32, 000 reviews, it is clearly a winner!!  It’s a game that you have to be among good friends because it is pretty raunchy and NOT politically correct. But it can be hilarious and it is a game that will produce a lot of laughs! This game is easy to learn and has minimal set up and materials. Perfect if you just want to be able to hang out and talk! There are tons of themes and expansion packs if you need new material! 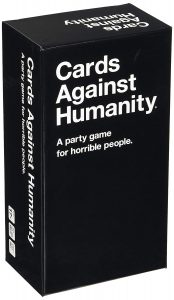 What do you Meme?

Recently, we were out to dinner and the restaurant had board games including  What do you Meme? , After playing a few rounds, we decided it would be fun to play on New Years Eve. We were with the kids so we only showed them “kid appropriate” cards. It is definitely another party game that is not suitable for kids. Compete to create the funniest meme by pairing caption cards with the photo card in play. Similar to Cards Against Humanity, there is a rotating judge who determines who has the best answer. In this case, it is who has created the best meme.  This game also tons of themed expansion packs!

This is another game that you would want to play with good friends! Everyone is in the hot seat as they have to answer questions like “What would a documentary about my life be titled up to this point?” and “What will my gravestone say”? There are a mix of funny and somewhat deep questions. Unlike Cards Against Humanity which is just about having funny answers, Hot Seat requires you to answer openly and honestly! Fun game if you want to get to know your friends even better! 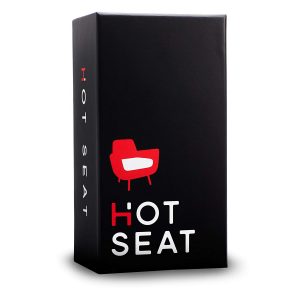 Another funny card game that can includes adult humor is New Phone, Who Dis?

Players take turns drawing a sent (or “inbox”) card while the rest of the group competes to play the funniest reply card. Once everyone in the group has played their chosen reply card, the judge decides which combo is the funniest. That person gets a point. The person with the most cards at the end, wins. This is a fun game when you have at least four players.

These games are not just for New Year’s Eve. So I guarantee once you play them on NYE, you will be playing them all year long!

25 Family Friendly Activities to do on New Year’s Eve

30 Christmas Traditions to do with Kids

It is fun playing board games on New Years as it is a great way to add energy and pass the time until midnight! What are some of your favorite games to play with friends and family? 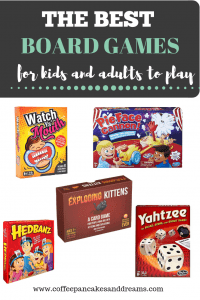 We are a participant in the Amazon Services LLC Associates Program, an affiliate advertising program designed to provide a means for us to earn fees by linking to Amazon.com and affiliated sites.

This site uses Akismet to reduce spam. Learn how your comment data is processed.

We are a participant in the Amazon Services LLC Associates Program, an affiliate advertising program designed to provide a means for us to earn fees by linking to Amazon.com and affiliated sites. Thank you for supporting my blog!

This website uses cookies to improve your experience while you navigate through the website. Out of these, the cookies that are categorized as necessary are stored on your browser as they are essential for the working of basic functionalities of the website. We also use third-party cookies that help us analyze and understand how you use this website. These cookies will be stored in your browser only with your consent. You also have the option to opt-out of these cookies. But opting out of some of these cookies may affect your browsing experience.
Necessary Always Enabled
Necessary cookies are absolutely essential for the website to function properly. This category only includes cookies that ensures basic functionalities and security features of the website. These cookies do not store any personal information.
Non-necessary
Any cookies that may not be particularly necessary for the website to function and is used specifically to collect user personal data via analytics, ads, other embedded contents are termed as non-necessary cookies. It is mandatory to procure user consent prior to running these cookies on your website.
SAVE & ACCEPT
Loading Comments...